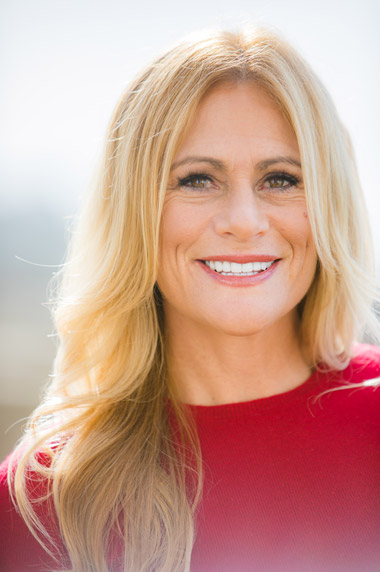 Discover how a World Champion Adventure Racer and Firefighter can dramatically improve your team Performance, Commitment, Collaboration, Culture and Leadership

As one of the World’s Top 50 Keynote Speakers, the #1 Female Speaker for MeetingsNet and recognized as one of the Top 10 Speakers Featured by Harvard Business Review, Robyn is known as an inspirational force for leadership, teambuilding, and extreme performance.

It’s no wonder why global business leaders and Fortune 500s hire Robyn to inspire a culture of continuous improvement and total commitment.

Robyn and her teammates have won “The Toughest Race on Earth”. She has one of the toughest jobs on earth: America’s First All Female Fire Crew! And she helps Survivors rekindle their inner bad@$ and turn setbacks into comebacks as a CNN Hero.

Robyn gives audiences the tools they need to cross their own finish lines— especially when the challenges are steep, the goals are audacious, the competition is fierce, and constant change is the only guarantee!

How to Achieve Breakthrough Performance Through Collaboration, Creativity, and A Culture of ONE 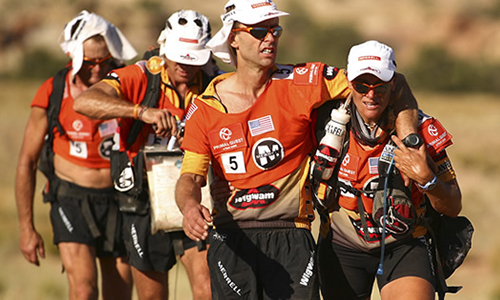 Inspiring Greatness Through G.R.I.T.
Creating The Passion To Pursue The Impossible 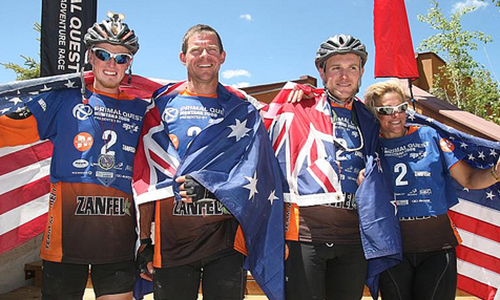 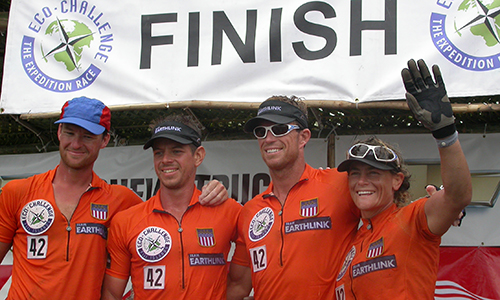 Adapt, Overcome & Win As One
5 Secrets to Extreme Teamwork

Robyn Benincasa is also a Top Leadership & Teamwork Virtual Keynote Speaker. In her authentic, fast-paced 30-45 minute multimedia Virtual Keynote, Adapt, Overcome & Win As One, Robyn shares the mindset and strategies to inspire your team to drive through challenging times together, even when they’re apart!

“Six years later, we are still talking about the key learnings, the fun, and the excitement of working together as a team.”

“After implementing the 8 Essential Elements with my sales team, we went from 17th in the nation to 1st!”

“Your presentation style and message really energized the attendees. We heard nothing but great comments and feedback from many of the attendees throughout the week!”

Robyn Benincasa has made an art form of extreme performance by competing and winning at the highest levels of sport and business. Robyn is an award-winning keynote speaker, a 20+ year veteran San Diego firefighter, a World Champion Adventure Racer, a best-selling author, and founder of The Project Athena Foundation. 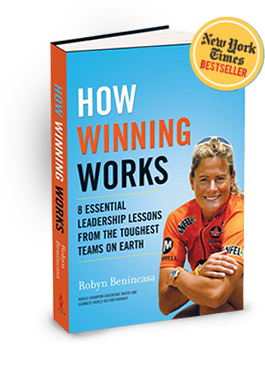 Discover all of the teambuilding and leadership skills that Robyn and her teammates have learned on their quest to win the toughest races on Earth.

Get Your Field Guide to Extreme Performance

Robyn's dynamic and inspiring keynotes have earned her accolades as one of the World's Top 50 Keynote Speakers by Real Leaders magazine.

Filled with stunning adventure photography, inspiring quotes and helpful tips, this guide gives an awesome "Cliff Notes" overview of Robyn's principles of teambuilding, leadership and adversity management. Robyn gets TONS of requests for this guide after her presentations, so she's made it available for you!

Teamwork During a Pandemic

My Journey to Becoming a Motivational Keynote Speaker

I graduated from Arizona State University in Marketing. For the first eight years of my professional career, I was in pharmaceutical and hospital supply sales for Allergan, Baxter and Medline. Then I decided to leave the pantyhose and heels behind for firefighter turnout pants! I became a Sand Diego Firefighter about 23 years ago, and a speaker, by a twist of fate, along the way.

On the sports side, I started out as a gymnast at 8, and competed through high school, where I was a four sport athlete (gymnastics, diving, track, and cross country). In college, (go Sun Devils!) I was a springboard diver, and upon graduation and a move to San Diego for my first pharmaceutical sales job, I was naturally drawn to the local obsession of Ironman Triathalons. After my 9th Ironman, I decided I needed a sport with weight divisions (I was a Rottweiler competing with Greyhounds!) and became a Judo player, ultimately fighting on the U.S. team in international competitions. Then, after 25 years of competing in multiple sports, I FINALLY found my ultimate love…Adventure Racing!

When I discovered Adventure Racing, I not only discovered the sport that I was meant to do, but the joy of becoming a teambuilder and teammate.

I became a motivational speaker kind of by accident, after my Adventure Racing team won the Raid Gauloises World Championships in Ecuador.  Soon after, we were contacted by writers for Fast Company Magazine, who were creating a feature story entitled  “Extreme Teamwork”, the goal of which was to look at some of the world’s most consistently high performing “extreme teams” (think NASA, Industrial Light and Magic, Navy Seals and us!), and to share with readers how to apply our special brand of teamwork, creativity, agility and resilience to their own fast moving companies.  Evidently, the article created a big buzz, because soon after it was published, Fast Company Magazine asked if someone from our team could come and speak at their upcoming reader conference called Realtime.

All of my teammates are introverts by nature, so the speaking engagement rolled right downhill onto me, the newest member of the team.

I was scared to death! But I was incredibly lucky that day because there was a Zone VP from Starbucks in the audience. He came up to say hello after the presentation, and I suddenly found myself on this 15-city tour to speak to Starbucks store managers! I discovered pretty quickly that sharing the skills of teambuilding and creating human synergy in pursuit of huge hairy goals was deeply inspiring to people. And to me! So sharing the gospel of Winning as One, in every aspect of our lives, became my mission.

To this day, I’m still nervous before I walk onto a stage, but I feel like I’m giving a gift to people, and providing a service. I’m helping them find the fastest, most efficient way to live their dreams and reach even greater heights by figuratively “roping up” to other people who have strengths, backgrounds, skills, culture, and experience that they may not have themselves. Because together we can rise higher than any individual could ever rise alone.

When you bring in an outside speaker like me, it has a big impact because your’re sharing something completely unique and entertaining, but that truly and deeply inspires your organization and your team members to adapt, overcome, and win as one; especially when the goals are huge, the stakes are high, and change is the only thing that stays the same. People leave my keynotes understanding that they don’t have to know how to handle EVERYthing, because with a world class team around them for the journey, they can handle and succeed at ANYthing.

At first, I know that meeting planners may look at some of my videos and go, “Oh, dear baby Jesus! My people aren’t going to be able to relate to people rappelling off cliffs, pulling leeches out of their arms, and running around in the mud.”

To which I would say two things.

First of all, it gets their attention.

Viewing the world through the lens of Adventure Racing is something truly unique and authentic that people have never seen before. So it’s not the same old sports analogy over and over again. In my keynotes, Business leaders and frontline employees alike see teamwork and leadership from a completely new and entertaining angle, but most importantly, people understand very early in my presentation that they’re all adventure racers, whether they set out to be one or not.

One of the first things I ask after my opening video is, “does anybody here want to be an adventure racer after that charming description and video with the leeches?” Nine times out of 10, not one person raises their hand.

To which I say, “Good. Because You’re all WAY too smart for that! Not to mention the fact that you have *real* jobs. But guess what? With what you do every single day, you’re in an adventure race every minute of your lives. Tell me if this doesn’t describe your life right now: You’ve got small teams of men and women, who are trying to navigate through totally uncharted terrain, in pursuit of what seems like an impossible goal, working against extreme time pressures, in constantly changing and challenging conditions, and with the tiny little goal of doing all of that for your customers and your teammates among the best of the best in the world.” (lots of nodding and smiling from the room).

Secondly, even though people can’t see themselves lining up at a start line in Borneo or Tibet for a 10 day non stop adventure race, they can see how it applies to their own life… To have these crazy big goals. To build a great team around them for the journey. To have the courage to navigate their own course, innovate, overcome, and take risks.  They take all of these skills, and the inspiration to make their dreams and goals reality, home with them in their hearts and minds. They want to BE that kind of leader. They want to BE that kind of teammate. They want to CREATE those incredible moments that they experienced in my keynote with their own world class team. And from the emails I receive even years after my presentations, most of them make it happen.

People think it says tumble doctor (I guess as a past gymnastics coach, I was a tumble doctor too!), but it really says Team Builder.

That’s who I am at my core and what I do in every aspect of my life. From being on stage and helping people realize the value and the magic of teamwork, to the crew love we build in the fire station, to helping Survivors live an adventurous dream as part of their recovery through my 501c3 non profit, The Project Athena Foundation. Every aspect of my life revolves around being that person that inspires people to understand that we truly are better…together.  When we genuinely care about each other as much as we care about ourselves, and we’re not just working WITH each other, but FOR each other, that’s where the magic happens.

This belief in being of service to inspire and motivate team building success has helped Robyn Benincasa become one of the top female keynote speakers and business speakers in the United States. She is also the author of the bestselling book, How Winning Works.